skip to main | skip to sidebar

Last weekend had been full on with racing though I thought. And I tried to be mentally prepared. One of the local clubs held their annual regatta and there had been a start for the dinghies. I was going to start in the Moth and my YS was set on the A-Cat Class number of YS 76. Not that I cared about it. I was happy to have a race to compete without packing and traveling far. Went out to practice on Friday but it had been a bit breezy and after a capsize fest together with a 29er and some Lasers, who all went into the "drink" at certain times, when strong gusts from the East came through, I skipped sailing and left the energy for the next day.

Next morning the wind had not eased much but it all looked good. Somehow the race committee had their own way of giving signals and as they never took "P" down, I missed the start by 30 seconds. Climbed back and lead at the weather mark right in the middle of the keel yachts, which had started 5 minutes earlier. Made a mistake (capsized) in front of the mark due to giving right of way and than bore off to a great downwind run. Tried to figure out how to best attack the "narrow path" as the water was very low and the sandbanks nearly looked through. Therefore no way of foiling over them. All of a sudden I hit, or better, something hit me underwater. Turned the boat over to inspect the foils but all looked OK.

Righting the boat was OK but starting it, was difficult. A lot of times I buried the bow and kind of cartwheeled whilst bearing away. Not funny. In hindsight I think, it had ben the eased vang and the outhaul. Note to myself: pull tight after capsizing in a breeze. The swimming and all took much of my energy and I still feared some damage. Next Moth race is ahead next weekend and I want my boat to be in the best possible condition. I sailed the boat home without making it around the course. Fastest boat on the course had been the Melges 24 followed by a windsurfer. Claus, who is more than 70 years of age and spending every wintertime windsurfing at the Mar Menor from Camping La Manga. A great role model. He used a modern raceboard and I think 9 qm of sail. The participating cats ended up in the back with a lot of capsizing. The only Laser who finished, came back "home" late in the evening. The party was on in the Fahrdorfer Segel Club vis á vis from were we live. We took our 36db to cross the water and take part in the festivities. During the trip back in the pitch black night (not really, the town was lighted) K. and I decided that we take "Samantha" and do the Sunday race doublehanded. 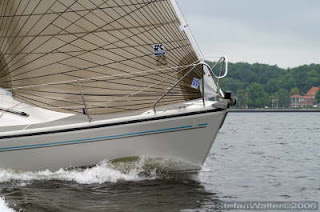 So we did. But first we had to wash the boat and to get rid of all the spiders and dirt which had aggregated due to the long time being without moving from the berth. We had a good start, being more familiar with the signals in very, very light air. Code Zero or jib had been the question before the start but the small wind shift two minutes into the start left no option and upwind we tacked with jib. Only the Melges pulled slowly away from us and extended after rounding the weather mark for a long reach. We hoisted our 0.5oz "Whomper" which I had purchased as a used sail from a Mumm 36 about 15 years ago. What a great sail this spinnaker still is. Two reaches and we had sailed away from the X-79´s an Luffe´s and other keelyachts. Just the Melges in front. I was surprised as with the boat only being used occasionally this summer it still was slippery throught the water. No underwater species to see. Anchor and chain in the front locker and some water in the tank. Normally on race day this would not have been our style. But this was a sunny Sunday. And it was a real pleasure to sail the boat. On the second round we were nearly passed by Andreas and his X-79 team but with a good mark rounding an a beat in the light wind (no ripples on the water) saw us in front at the last weather mark. Due to the very light, drifter like conditions, we did not hoist a different headsail, instead kept our cool and sailed away again from the fleet, which had caught up on the last leg and desperately tried spinnakers and other combinations to catch up with us. To much tumult on their foredecks and just not enough breeze to fill a 0,75oz spinnaker.

Looking forward to the upcoming weekend, when we will be sailing our "Zhik Moth German Open 2011". K. will take part in her first Moth regatta with her M2 "Goldfisch". Three Moth women have signed in. Participants from Denmark, Sweden and the Netherlands will come to sail 3 days at Lake Wittensee. Weather forecast looks good. Again our president Carlo has found great sponsorship and the food and party will be as good as at the Europeans this year. If you can manage a last minute entry, you are welcome. Look for details at the German Moth Homepage: mottenfieber.de/
Eingestellt von Fred um 11:48 AM